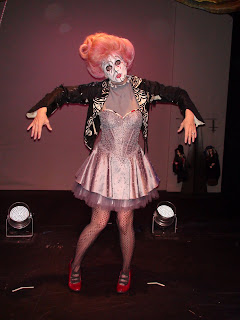 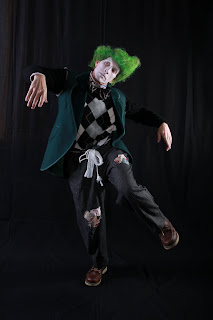 So the beginning of July the Gallimaufry Performing Arts ( see link on right ) contacts me to re-work some marionettes. Oh yeah, and they all need to be finished by July 20 because on August 5 they all will be in Scotland performing at the Edinburgh Fringe Festival ( see link at right ). And I already have vacation plans for July 8 through the 12th. How hard could it be? I'd basically have about 2 weeks to transform 4 marionettes, make a brand new one, and re-string 9 marionettes.

Well, luckily marionettes make perfect clients because they hang ( ha ha ) around your studio all day, don't complain if you stick a pin in them ( or saw off parts ), don't have an opinion, don't worry a costume will make them look fat, and are quite pleased with any end result :)

The challenge of this commission is that the play is an original production of a Ray Bradbury short story and is a fantastic blend of music, dance, and human actors whom the marionettes mimic ( kinda, but not really, like a mini me ). It's really a visually striking production and quite unique with the actors/dancers on stage with the marionettes.

That's when I was called. 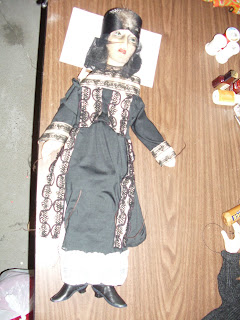 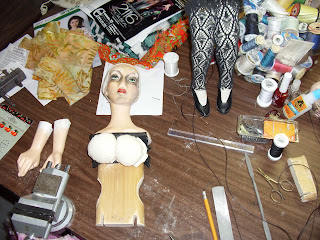 Mrs. Wycherly was quite a challenge. A total transformation was needed that went beyond a simple change of costume. She was literally a chunk of wood which made her flat-chested, bald, no waist, no thighs, and no upper arms. Lucky thing under her veil she had a pretty face! I stripped, sawed, padded, and sewed to create a new woman. Now I know how those women feel on extreme make-over shows:) She was a diamond in the rough and I think she polished up real pretty!
Posted by JD Nowland No comments: 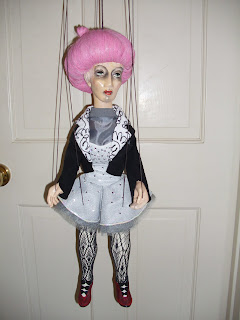 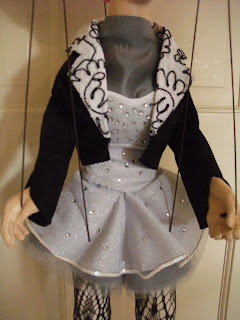 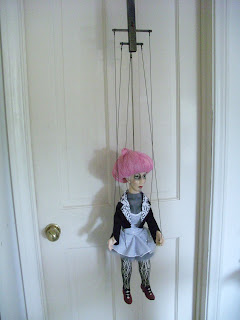 Mrs. Wycherly is by far my most dramatic marionette make-over. She went from flat-chested, dark, gloomy, funeral attire to a sexy little pistol! She was easy to completely disassemble because she her 'body' was super simplistic. I actually greatly improved most of her joints and sawed a couple inches off her torso ( so she'd be closer in size to Mr. Wycherly ). All her costuming was made without patterns and if you've never sewn a 1/4" lapel, well you just haven't lived:) I also had to create her legs and wig, which were vitally important to her look. I made a wig cap, sewed long strands of fleece ( used for doll hair ) to tissue strips, painted the fleece pink and attached it to wig cap before attaching it to her head. Then I styled her bodacious hairdo and gently coated it all with glue because she's going to be doing some serious traveling! Break a leg Mrs. Wycherly.
Posted by JD Nowland No comments: 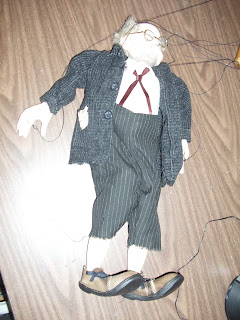 Poor Mr. Wycherly looked so very out of place whenever he appeared on stage with his actor double. He was ages older than everyone, much shorter and his strings were not long enough! Although he was very nice and polite to work with during his transformation.
Posted by JD Nowland No comments: 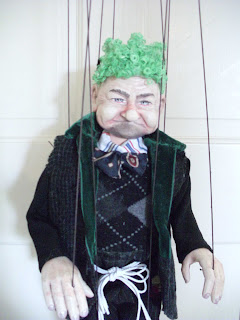 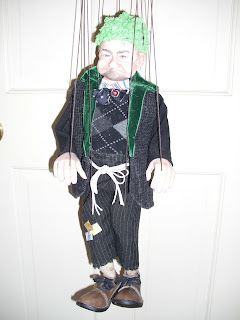 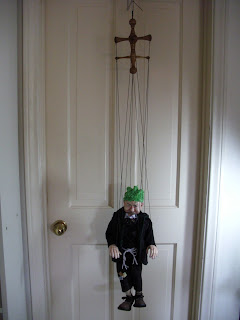 I'd like to introduce you to Mrs. Wycherly's dashing husband. As you can see the actor looked nothing like the sad little old man marionette that was purchased to portray him. So I had alot of work to do! The difference was that this was a well-made marionette. What was under the clothes was more impressive than the costumes. All wood carved limbs with intricate jointing, a shaped torso, and a head that swiveled on the neck. In fear of upsetting the perfect balance of the marionette I did not disrobe him and only added to his ensemble. I did saw his thighs in half and add a 1" block of wood because he was MUCH shorter than Mrs. Wycherly and the director wanted him taller. And the green hair definitely helps identify him for the audience.
Posted by JD Nowland No comments: 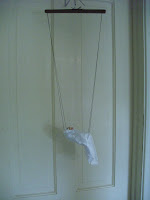 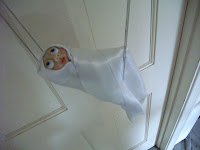 The only brand new marionette that needed to be made was a baby. Luckily I already had some interesting ( hopefully baby-like ) faces that I use for my flower marionettes. Add a little stuffing, a baby blanket and you got a baby...with a face only a mother could love.
Posted by JD Nowland No comments:

switch the witch: BEFORE 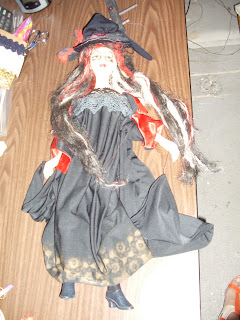 This is how the two witch marionettes looked when I was requested to make them more 'cirque de soleil'. An interesting challenge with serious time restraints; 4 days. These are incredibly simple marionettes with a block of wood for the torso, very primitive jointing, and details only in plaster cast face, hands and calfs/feet. The faces are painted fabulously and the super draped costumes hid alot.
Posted by JD Nowland No comments:

switch the witch: AFTER 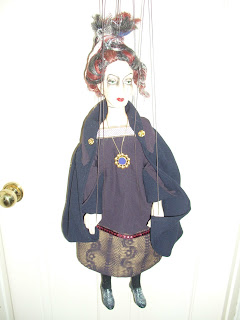 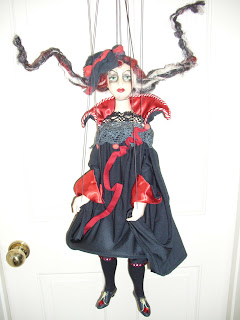 So this is my marionette make-over for the two witches. I think I succeeded in funking them up! Amazing what a new hair-do can accomplish:) Since I didn't want to sew completely new clothes I was challenged to change up the drab, long black witch clothes. I think they look a little Victorian and I'm okay with that
Posted by JD Nowland No comments:

What was THAT all about????

So my marionette make-overs will be having a one night European preview performance in Laguna Beach on July 22. Because come August they will be jetting off to Edinburgh, Scotland to be part of the Fringe Festival.
If you'd like to discover more about the Gallimaufry Performing Arts and/or the Fringe Festival in Scotland ( wish I was going ) then check out the links to your right. Gallimaufry and Fringe are both under Theatre. Remember the musical that stars the marinettes ( ok, and alot of very talented actors ) is Ray Bradbury's 2116 the Musical. Type it in under events for description of play and performance information.
Posted by JD Nowland No comments: