A Day at the New York Metropolitan Museum Of Art

Long before I booked my trip that included New York City, I had read about the Impressionism, Fashion, and Modernity exhibit at the Metropolitan Museum Of Art that was going to coincide with my travel dates.
Since my favorite art period is Impressionism I gladly purchased my ticket.
Imagine my surprise when a controversy began after my visit that the Met is FREE!
They just word the ticket website very tricky so people think they must pay $25.
I don't mind supporting the arts but, I had thought it strange the ticket price had read ' suggested ticket price'...
I even received an explanation about my purchase from the Met after the controversy broke. 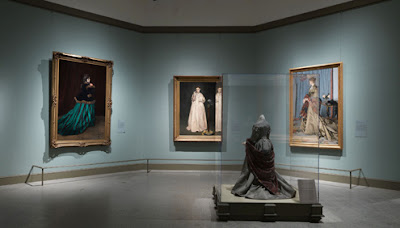 This is Gallery 1- Refashioning Figure Painting. The artists full length figure painting was a departure from the normal portrait paintings. The role of fashion in the works of Impressionists and their contemporaries was " for painters of modern life, fashion mattered ". 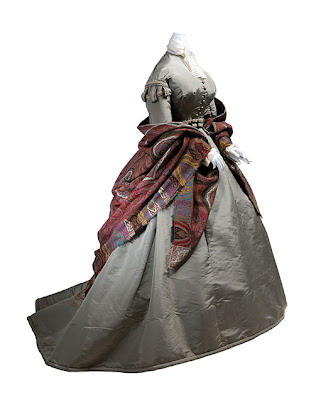 This exhibited French Day Dress from 1865-67 is made of gray silk faille. 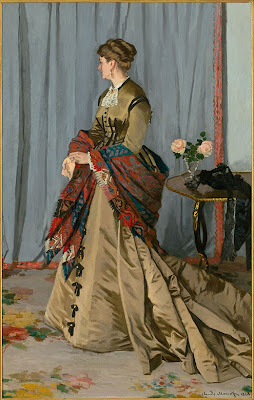 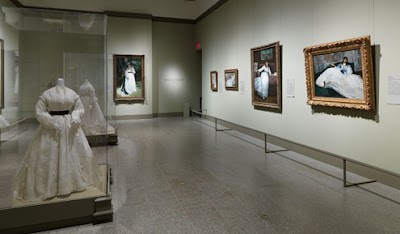 Gallery 3-The White Dress. The simplicity of the white dress was reflected in the artists renderings of large diaphanous gowns. The bold brush strokes went well with the bold absence of details in the gowns. 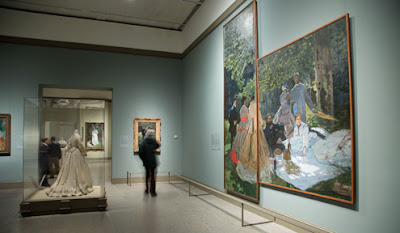 Gallery 2- En Plein Air. This gallery was impressive because two panels of Claude Monet's 20 foot wide "Luncheon on the Grass " was shown together for the first time in the USA.
En Plein Air is French for literally in the open air. And that is what the Impressionist artists were trying to capture; the light, the shadow, the spontaneity. 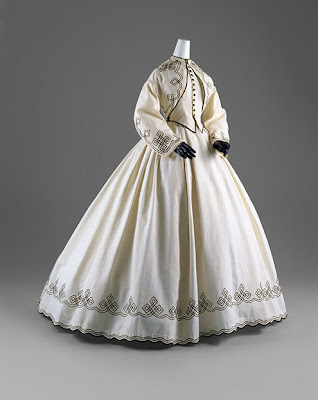 This is an exhibited American Day dress from 1862-64.
It is made of white cotton pique with black soutache. 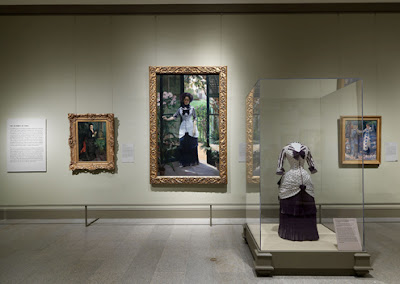 Gallery 5- The Dictates of Style. The large painting is " In The Conservatory " by Albert Bartholome 1881. It shows the fashion changing from the bustle to a more streamlined style. Artists also were again interested in the details on the fabrics and how light and shadow played off the textiles.

No photos were allowed in the exhibit and I have loaded all the images off the Metropolitan website.
More information and images are available at www.metmuseum.org

And if you have the good fortune to go to the exhibit, remember it's free! 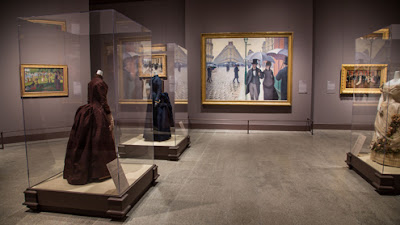 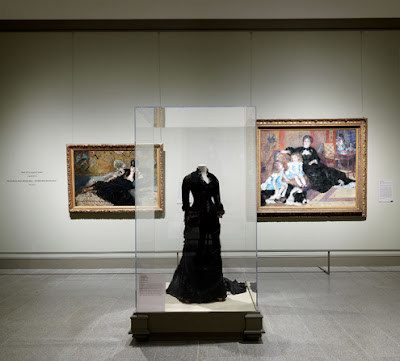 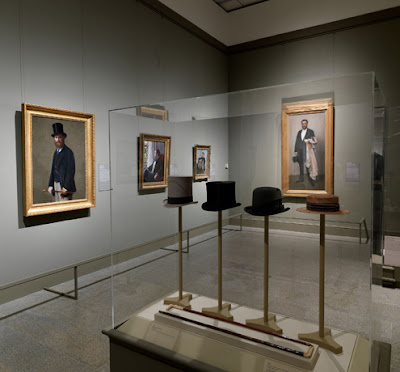 Gallery 6- Frocks Coats and Fashion: The Urban Male
Fashion options for men was becoming simple and limited. Much like it is today. 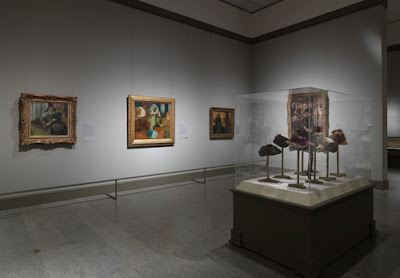 Gallery 7- Consumer Culture
Hats and more hats :) Degas apparently painted a whole series on customers, salesgirls and the objects of the customers desires, usually a hat. 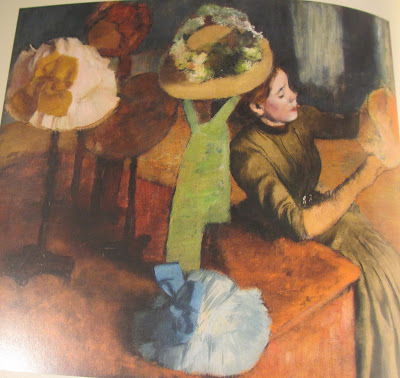 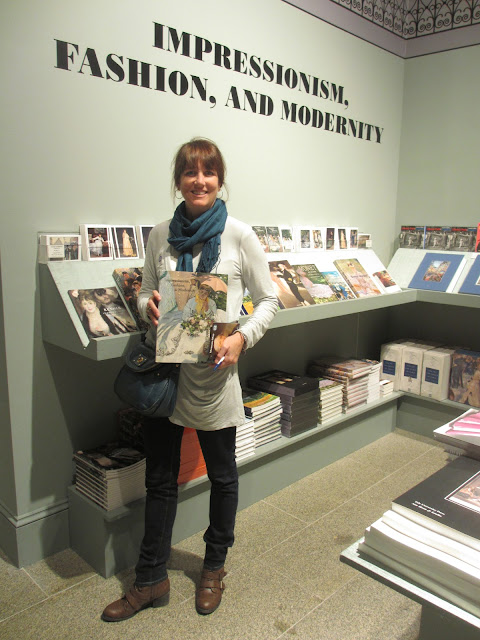 Although I thought I was very clever photographing images from the catalogue that I had liked in the show, the actual book was very large and heavy. Not a good thing to have to pack in luggage that was already dangerously close to being over the weight limit.
Plus, I really wasn't blown away by the exhibit. The paintings were amazing but, the clothes were not equally impressive.
Egads, have I been to too many costume exhibits? Am I becoming jaded? What will happen when I'm 88 going to exhibits? Will I be a sourpuss...?
Posted by JD Nowland No comments:

Hats off to New York

Having spent the morning at the overwhelming Metropolitan Museum my next stop was a smaller venue.
The New York Milliner's Guild was having an exhibit at the Tilden Mansion and Jasmin Zorlu ( one of the guild members and someone I have taken millinery classes with in San Francisco ) had sent me an email about the exhibit.
It was my good fortune that my brief stop in NYC was on the last day of the exhibit. 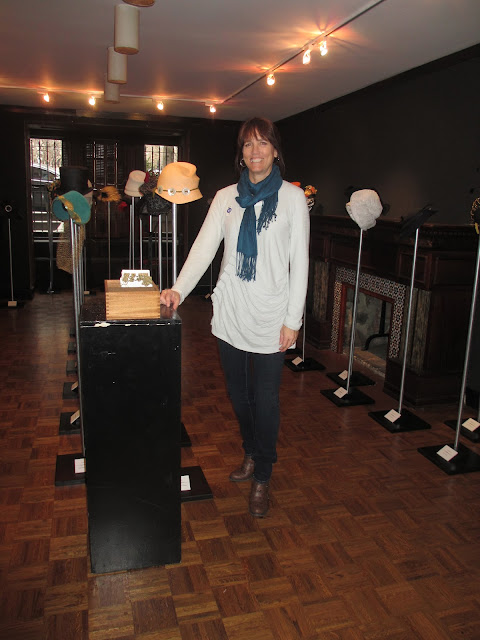 The Guild members had been challenged to create a hat for day and a hat for night based on the Cole Porter song " Night and Day ".
The hats were all fantastic and I wish I had photographed them all, but here are a few I did snap.


Cole Porter perfectly sums up my feelings about these hats in his Night and Day lyrics;

"day and night, night and day
why is it that this longing for you
follows me where ever I go "

He probably wasn't talking about hats, but I am! 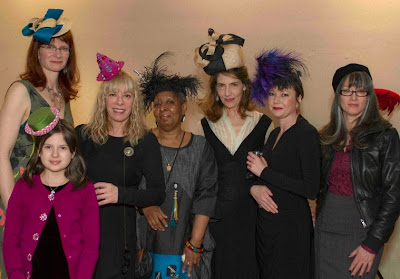 p.s. I pulled these photos off the New York Millinery Guild website at www.millinersguild.org
This is not all the guild members but what a very fun group and what great hats! 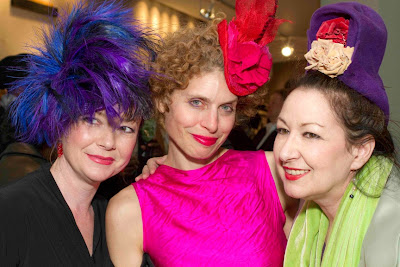 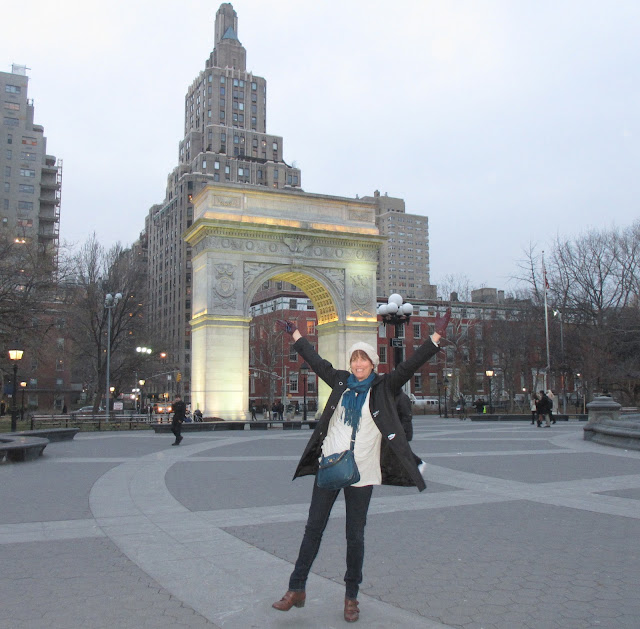 Every time I am fortunate enough to visit New York City I always feel the same... 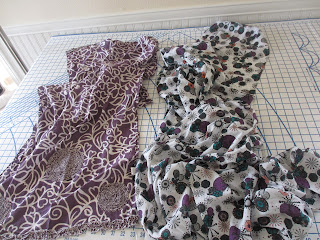 Friday I attended the Last Friday of the month Sample Sale at the California Mart in Los Angeles. It is a real treasure hunt and this trip I found scarves for $5.
I bought two scarves for a project that's been on my mind for quite awhile...
creating a mixed fabric scarf. 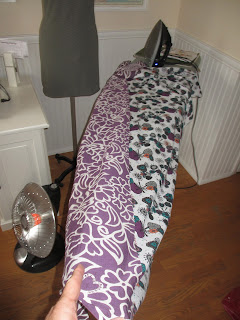 I cut the larger scarf down to the same dimensions as the smaller scarf ( approx 20"X 62" ) and then I had to decide if I should sew the short ends together into a very long circle scarf OR sew the long edge together and create a wide scarf.
I basted the pieces together both ways and the fabrics intermixed much better when worn as a wide scarf. 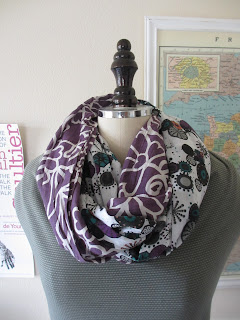 But, of course I love a good circle scarf and I couldn't resist after-all sewing my new wide scarf into a circle!

Love my newest scarf.
Posted by JD Nowland No comments: