Okay, so I procrastinated so long about buying tickets to the California Community College 2011 Fashion Symposium on April 16th that tickets were sold out . I was feeling quite sorry for myself when I got an email blast that Tim Gunn was participating in a fashion show at Fashion Island on the 16th and I decided to console myself by attending. It was a record breaking heat wave of a day so I cruised up PCH with the top down ( on my MINI! ) and a serious sun hat. Being alone I was able to squeeze into a seat just 3 rows from the stage and I was stoked! The fashions were by Kate Spade, Lucky Brand and Juicy Couture. I have some Lucky Brand necklaces but, I'm not a big shopper of any of these brands but, I was really there for Tim Gunn. And he did not disappoint; from the moment he appeared on stage he was witty, insightful, funny, catty, and quite the fashion sage. I was grinning from ear to ear and when I was selected to ask my question at the end of the show my heart was pounding in my chest. It was an intoxicating afternoon of fashion, commentary, unsurpassed people watching and just a great time! 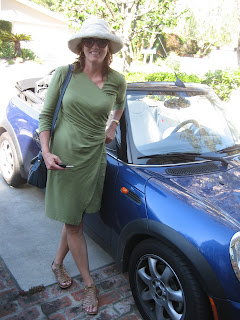 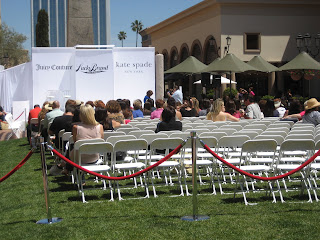 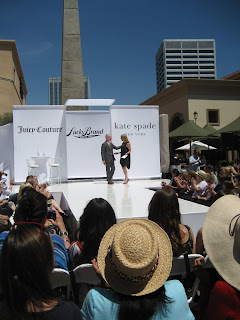 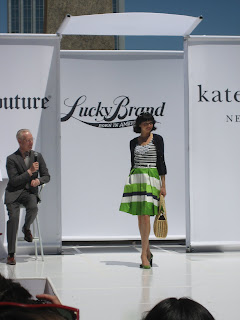 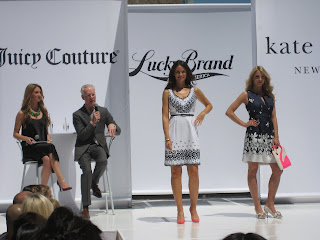 OMG! What is there NOT to love about Kate Spade... I know she doesn't own the label or design for it anymore but, I still love Kate Spade. Such a rich understated elegance. I wish I could design like this. All the looks were effortlessly chic and would really look good on females from 15 to 75. The color combinations, the mix of patterns, the proportions, the silhouettes, it was just all done so extremely well. Tim Gunn called Kate Spade the Elsa Schiaparelli of the 21st century. All I know is that I immensely enjoyed the collection and I would buy any/all the garments if I won the lottery:0
I really loved the little straw hat with the yellow dress. Why oh why don't women wear hats anymore?? They are just SO DELIGHTFUL!!!!!!!!!!!!!!!!!! 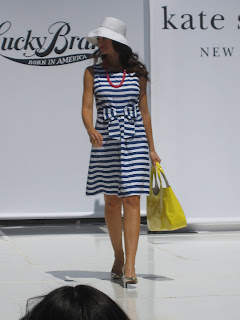 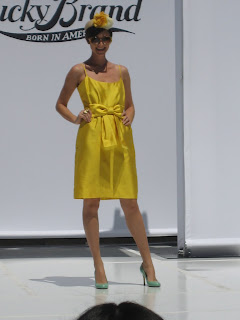 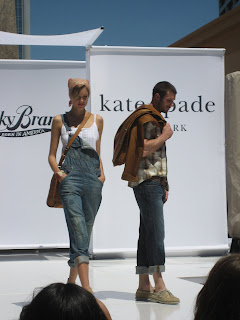 The Lucky Brand fashions were definitely more casual. Alot of denim and alot of male fashions ( the male models were HOT!!! ). I'm just showing my few favorites, there were also rompers and white jeans which Tim Gunn predicted would be really big this spring and summer. The shirts were most interesting with a loose knit top that featured chevron stripes which Tim said is flattering on every figure. I also really like the sleeveless sweatshirt the model is wearing with the embroidery on it. I'm thinking I might cut the sleeves off a couple of my sweatshirts and see if it makes them a little more fashion forward. 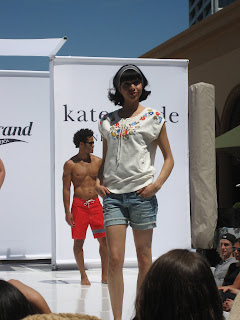 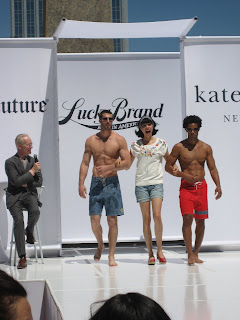 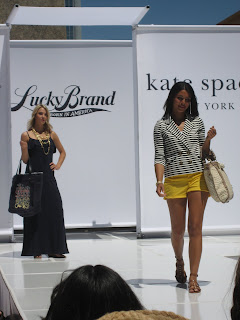 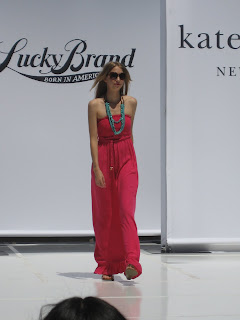 So Juicy Couture was a perfect bridge between the dressier Kate Spade and uber-casual Lucky Brand. I'm not that big a fan of Juicy because I think of it as young girl fashions and I may be the only female in OC that never owned one of their velour track suits. But the fashions were pretty with alot of terry cloth. And two notes about the necklaces; the blue one is from Lucky Brand and the metal one worn with the black maxi is actually a lot of bracelets linked together! Pretty cool idea. Also, Tim Gunn suggested that if you wear a maxi to dress it down and keep it casual. No stilettos with formal hair:)
The bathing suits were really cute. The ruching and ruffles could camouflage some figure concerns but, you sure as heck would never catch me in the bikini! 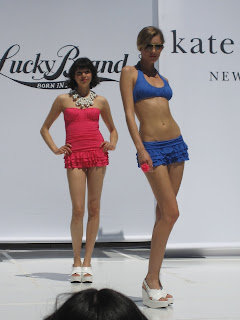 Now for the Good Stuff!! 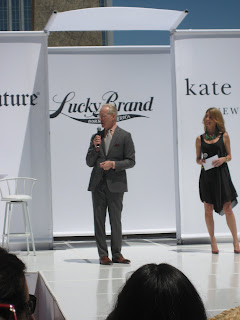 So Tim had some great quips. My favorites were, 1) " Wear your clothes with confidence, if you look in the mirror and think you look like an ass then you probably do! " 2) " Jewel tones work for everyone; pastels wash you out and neons make skin tone look terrible. " 3) " If your comfortable looks like you just got out of bed, then stay in bed!! " Tim was so very genuine and hilarious. He totally dished about Project Runway saying that last season Heidi and him were HORRIFIED that Mondo didn't win. But Micheal Kors said he was tired of edgy designers winning and Gretchen was more mainstream. Nina Garcia was agreeing with Heidi and Tim until Micheal told Nina that Mondo NEVER took her advice and Gretchen always did. That's how Gretchen won. Also, Tim will be on daytime TV starting in January with a yet to be filmed show on ABC. He's also publishing a book in January called ' The Fashion Bible ' about the history and evolution of garments plus how to wear them well. I enjoyed listening to Tim Gunn so much that when they asked if anyone in the audience had any questions I immediately raised my hand and was selected ( !! ). I want to sew a casual long skirt that isn't quite floor length but I have real doubts about what length would look good. According to Tim any skirt that is not to the top of the knee or the bottom of the knee is extremely unflattering because it truncates the leg. I kinda agree but, does that mean all capris are equally unattractive... I didn't get to say all that but, I would have loved to have talked fashion with Tim Gunn all day, any day, every day. He seemed like a truly fun person.
Posted by JD Nowland No comments: 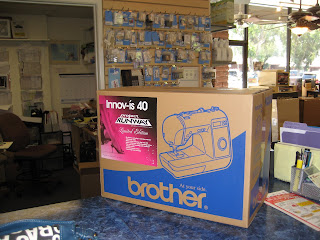 So I just want to sneak in that I purchased my first EVER brand new machine ( look, it even came in a box! ). Up to this point in my 35 years+ of sewing I have regularly inherited my mothers' old machines when she purchased brand new machines every ten years or so. And the last time I took in one of her old machines to have the busted gears replaced the service guy talked me into purchasing a "new" used machine for almost the same cost of replacing the gears. I really loved that machine except the stitch length control was not very responsive. So I was on my way to buy a Janome that I liked, except it was a 3/4 size machine instead of a full size machine. I decided to stop into Moores on Marguerite Parkway and there I met Dixon who had all the answers to all my inquiries. Moores does not carry Janome because they're not very impressed with the brand. Dixon showed me a consumer report that listed a Brother machine as highly rated as some extremely more expensive machines. After letting me sew on lots of different width fabrics and showing me all the gizmos I knew I wanted ( like a certain buttonhole feature, and blind hem, etc.), and telling me the machine was marked down from $599 to $399 I decided to buy it. I think I'm happy except I haven't even had time to open the box yet and my checking account now has exactly $63.09. And the machine says Project Runway- I'll HAVE to find some stickers to cover that up because it makes it seem so silly... The ssshhhhh comes in because I haven't told my hubby. With paying taxes this week, bills, college tuitions, car insurance, car registration, etc., etc. it seems a little selfish to blow my cash on a machine when I already have one. I justify it because when ( not IF ) my current machine gives up, I won't stress and make a hasty decision. I got a good value and an excellent warranty. Hopefully many years of happy sewing await me.
Posted by JD Nowland No comments: