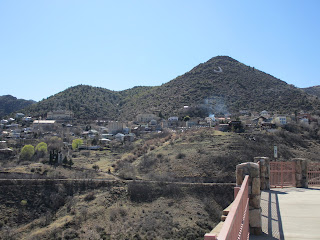 High on a hillside on Highway 89A in Arizona is a fascinating little town named Jerome. It all began in 1876 when copper was found in the hills. Jerome's mind boggling copper mines had literally BILLIONS of pounds of copper extracted ( I know because I watched a video at the Jerome State Historic Park ). The mines were depleted by 1953 and Jerome was almost a ghost town until the hippies moved in! 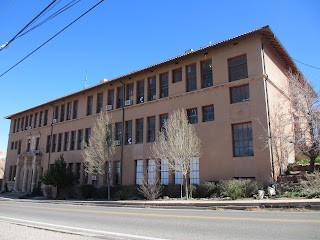 Apparently there weren't many kids left at the Old Jerome High School so the hippies turned the school into an artist colony and the classrooms all became artist studios. 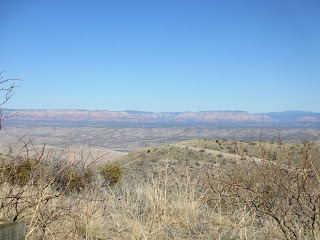 Wonderful, unique artisans are not just limited to the Old High School. The whole funky hillside town of Jerome is full of quirky galleries, shops and restaurants.
And wherever you are in Jerome if you look north the gorgeous painted desert of Arizona is visible as far as the eye can see.
Posted by JD Nowland No comments: 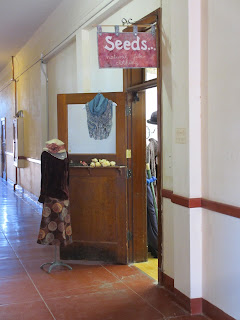 Down a hall in the amazing Old High School I found a little oasis and once I entered I just wanted to lock the door and never leave. 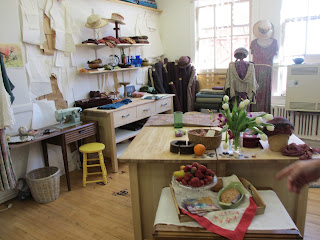 The studio is called Seeds and it is a garment and hat making wonderland full of textiles, worktables, equipment, hat forms, dress forms, and everything necessary to create and create. 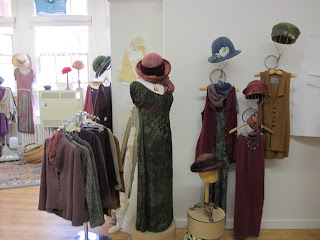 The proprietor was no where to be found but, that did not diminish the experience. Everywhere I looked I was delighted. 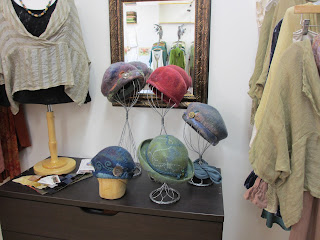 The hats were all felted and the shapes were fabulous. Of course I tried on at least a dozen. 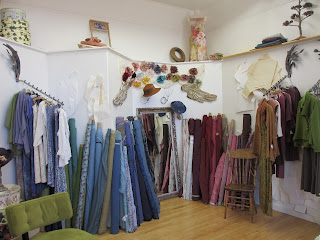 Not only are the garments and hats fantastic but, the whole space is simply inspiring.
I truly wished I had a life that included an escape from the world high on a hill in a room with light drenched windows, an indescribable view of Arizona's breathtakingly beautiful vistas surrounded by felts, fabrics and all the tools/equipment required to create wearable art.

Alas, it's not me but a couturie're and millinery artist named
Sandy Brown.
Posted by JD Nowland No comments: 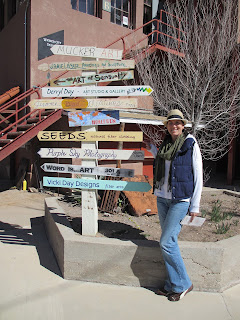 The numerous artists occupying the classrooms/studios are a diverse crowd and my heart leaped when I saw the sign for The Shoe College.
Is there a female alive who doesn't appreciate a great pair of shoes? 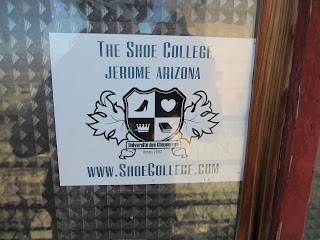 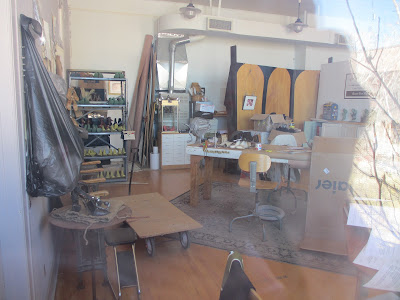 Unfortunately no one was home at the Shoe College but, I took this photo through the window because the studio just looks so darn interesting. All the tools were visible to create a variety of shoes.
( I don't know what fascinates me about labor intensive tasks like millinery, scrimshaw, shoe making, etc. I think I fear the secrets to mastery of many hand crafted skills may become lost in my lifetime and I wish I had time to learn them all!! ) 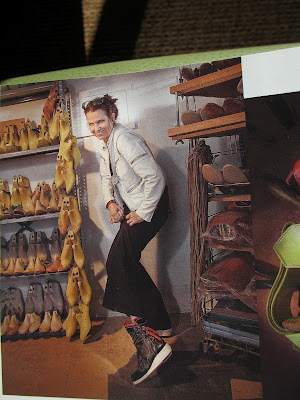 Anyways, the lucky person who gets to make shoes in the awesome studio up on the hillside in Jerome, Arizona is Tamara Lyndsay. There was an article on her in a magazine and you can read all about her at

Gidday Up in Sedona, Arizona 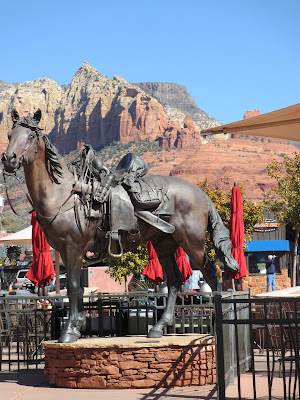 In beautiful downtown Sedona, Arizona there is this life size majestic horse statue... 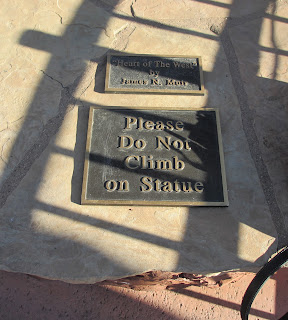 with this request posted at the base of the majestic life size bronze horse. 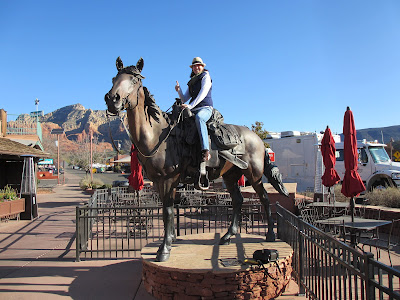 Gidday up!
Posted by JD Nowland No comments: 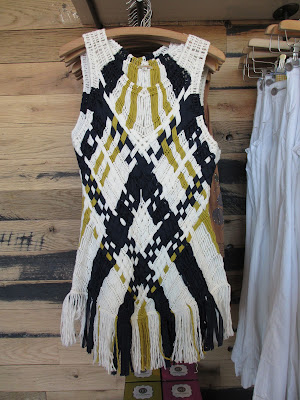 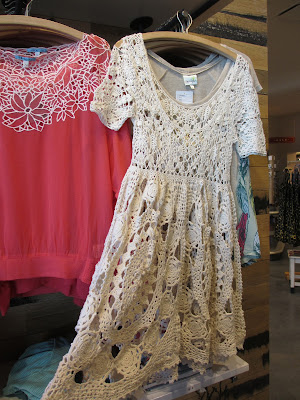 I was in my favorite Anthropologie store in Palm Desert and found these two garments that are COMPLETELY WOVEN BY HAND.

How do I know this? Because just like an earlier post about a hand woven top there are absolutely NO SEAMS at all.

No shoulder seams, no side seams, no sleeve seams ( !! ), no center front seam, no center back seam. Believe me I looked closely because I find this trend AMAZING!

The skill and time it takes to complete one of these garments is mind boggling to find it in a regular retail store.  And I never thought I'd say the $248 price tag on the top garment and $288 price tag on the second garment are a deal but, technically these are couture garments because they are completely done by hand.

I am going to research this and find out if the garments are made how I think-by hand or if there is some brilliant knitting like machine that creates these.

Nordstrom Rack ( not so grand ) Opening 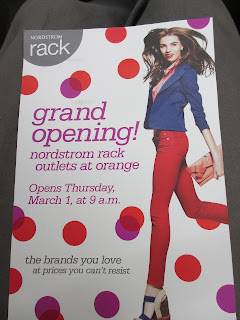 Last week I woke up way too early and attended the Grand Opening of a Nordstrom Rack in the city of Orange. I cannot remember ever attending any store grand opening so I was hoping for some deals... 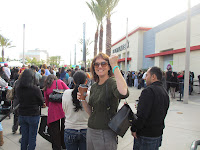 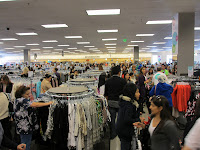 Apparently about 1,000 people had the same idea but, luckily my friend Liz and I were one of the first 375 crazies so we got to enter the store when it actually opened at 9am.

Moments before the doors were opened a name was drawn and this woman had 90 seconds to run through the store with a golden shopping cart and grab as much loot as possible BUT it could not exceed $2,000.

She grabbed like 7 purses, two pairs of shoes, some watches and a couple articles of clothing. There were also some golden hangers          hidden in the store worth $100 but, none were found by me or Liz. 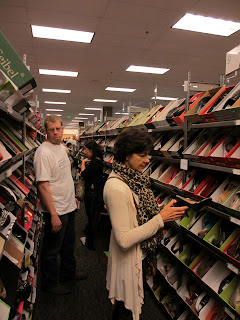 There were no great deals as a reward for our early morning and also no high end designer fashion at this store ( we know because we asked ).
But it was Nordstrom Rack and if you can't find a pair of shoes ( or 5 pairs ) that you like, well you just aren't looking hard enough :) 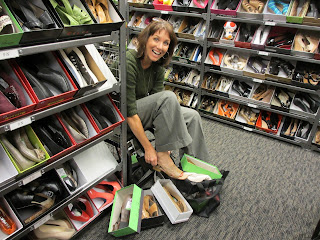 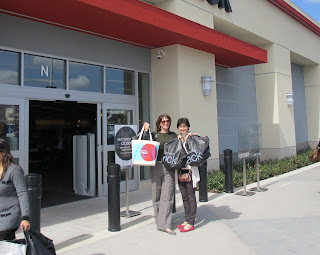 The not so grand opening was fun because I was with my friend but, next time I read about a grand opening I think I will just sleep in.
Posted by JD Nowland 1 comment: