Legion of Honor
( www.famsf.org )
in Lincoln Park
to see the wonderful exhibit 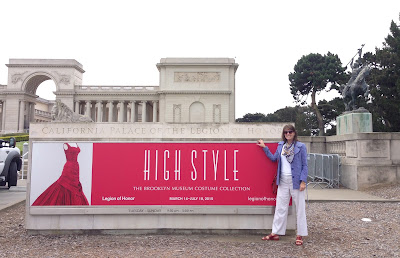 The 125 piece High Style collection represents
three centuries of European and American fashions from the late 1700s to 1990s.

This exhibit is a small sampling of the 24,000 women's and men's garments, accessories, hats and shoes from the Brooklyn collection that began in 1903.


There are numerous garments and accessories by one of my favorite
early 20th century French designers,
Elsa Schiaparelli.

She was a surrealist with a wit and originality in all her designs.

One of Elsa Schiaparelli's close friends was artist Salvador Dali.
I can picture them brainstorming their iconic images and ideas.

This trapeze shape dress with it's loose waist was a huge departure from the
previous silhouette of a fitted bodice and tiny waist.
It was part of Yves Saint Laurent's first collection for the House of Dior after
Christian Dior's sudden death in 1957.
This design was acclaimed for it's modernity and youthfulness.

My daughter decided this was her favorite dress in the exhibit.
The dress was created for a 1944 exhibit at the Metropolitan Museum of Art titled
" The Greek Revival in the United States "
The silhouette is based on a Greek chiton but, the beading and body-hugging form
definitely modernizes this dress.


The accessories room at the High Style exhibit is fascinating.
It seems modern society is pretty dull and conforming in our fashion choices
compared to the over-the-top inventiveness of prior generations.

I am a little disappointed that there are only about a dozen hats on display.
Most are by the American designer Sally Victor...
it was a sad day when women no longer completed an outfit with the perfect hat.

The last two rooms are dedicated to Charles James, an American designer from 1920 to 1954 that also had great success in London.
Charles James had no formal dressmaking training, instead developing his own methodology based on mathematical, architectural, and sculptural concepts.

Fascinating videos continually play at four of James masterpieces that deconstructed the gown into pattern pieces and then assembled them on the body.
To anyone that sews these videos are priceless. It's one thing to look at a beautiful gown but, so much more to see the shape of the pattern pieces !
These videos are easily the best thing I have ever seen at a designer showcase.

Another interesting and unusual part of the Charles James pieces are the 1/2 muslins.
These are how James worked out and developed his increasingly complex designs
before he cut into the final fabric.


The final Charles James gown is this " Tree " ball gown designed for the very wealthy
Marietta Peabody Fitzgerald Tree.
This is also the gown that adorns all the publicity for the High Style exhibit.

The " Tree " ball gown is an amazing example of Jame's
lifelong fascination of reshaping the body through corsetry.
The accompanying video that shows the many underlayers and structure is fantastic.

Charles James and his wealthy patrons became very active in donating his works to
the Brooklyn Museum.
Dozens of gowns, sketches, and more than 75 patterns were donated over many years creating a very thorough archive of his work

I recognized the name Charles James but, after viewing his work I am awed by his talent.
I really like the way his mind works.

High Style
The Brooklyn Museum Costume  Collection
is certainly one of the best
fashion exhibits I have seen this year;
these photos are just a small sampling.

Thank goodness someone in Brooklyn had the insight
to begin this wonderful collection that
showcases the ingenuity and great fashion design through
the centuries.