Cut! Costumes and the Cinema 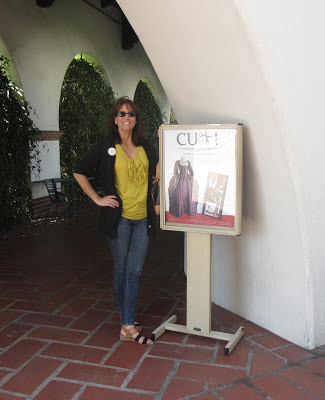 The Bowers Museum in Santa Ana opened a costume exhibit in December (!) that I have been trying to find time to visit for the last two months.
Well, the day finally arrived and I spent a glorious day at the Cut! Costumes and the Cinema before it ends on March 10th.


The exhibit consists of 43 costumes, worn by 30 actors in 25 different films. The common thread is that all the costumes were created by Cosprop in London.
Cosprop specializes  in "the creation and provision of period clothes for film, television and theater".
There is a fabulous explanation of how authenticity is created by the correct textiles, trims, and hand sewing that would have been used during the historic period that is the setting of the story. 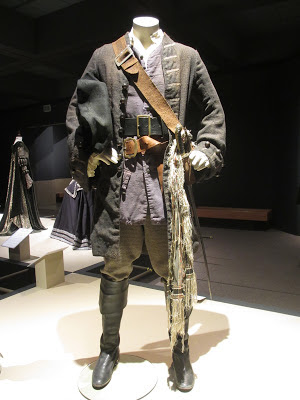 The exhibit isn't ALL gowns...AAARRRGG, can you say Johnny Depp as Captain Jack Sparrow from Pirates of the Carribean! 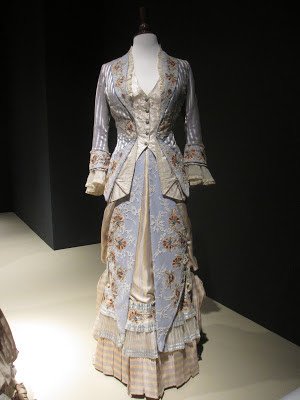 Never even heard of this 2006 film The Prestige that Scarlett Johansson got to wear this GORGEOUS jacket, top and skirt.
Seriously you could wear the jacket today with a pair of jeans and look great! 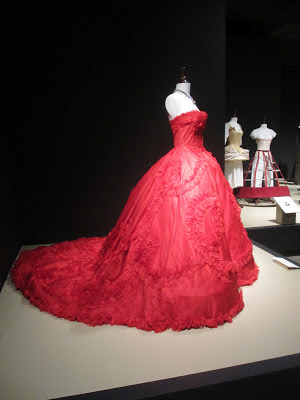 The color and volume of this gown made it a real eye catcher but, again I don't have any recollection of the 2006 movie Land of the Blind that allowed Lara Flynn Boyle to wear this amazing gown.
The information card said she cried when she took it off for the final time.
I'd cry too. 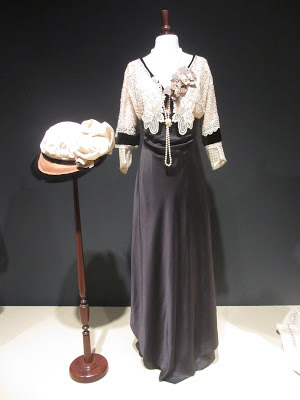 This is one of my favorite time periods at the beginning of the 20th century. This lovely ensemble is from the movie Howards End and was worn by Emma Thompson.
I loved the novel by E.M. Forster and the movie was almost as good.
Almost all millinery from this time period are scrumptious! 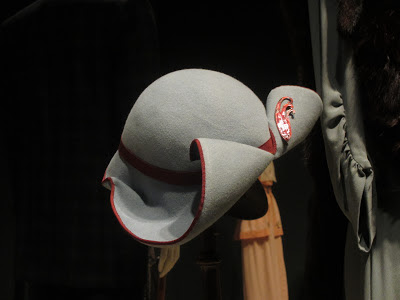 I couldn't resist sharing this delightful hat worn by Amy Adams in the 2008 Miss Pettigrew Lives for a Day.
Sometimes it's easy to overlook details and accessories when you're overwhelmed by the number of beautiful garments.
Luckily no-flash photos were allowed so I could capture every little thing.
Posted by JD Nowland 1 comment:

And the Winner is... 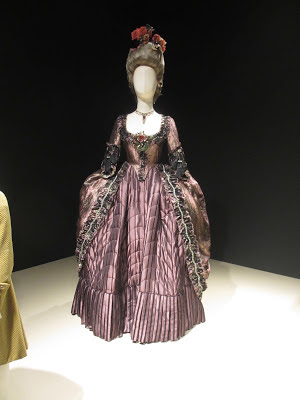 Apparently out of the incredibly, amazing, beautiful array of costumes only these costumes actually won an Academy Award in 2009 for costumes. 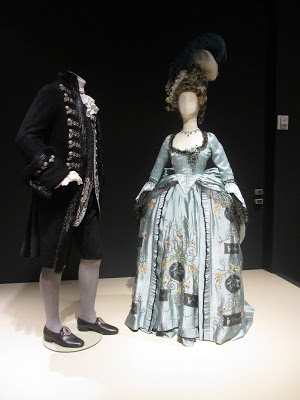 The costumes were from the 2008 film  The Duchess  starring Keira Knightley. 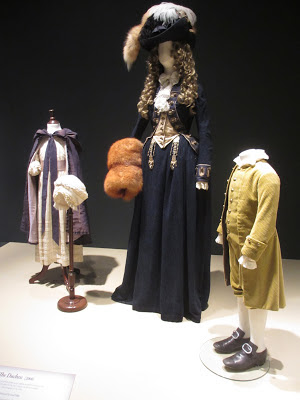 Many of the other lovely gowns were nominated for Academy awards and BAFTAs but, the competition must be fierce for this to be the only winner... so far. 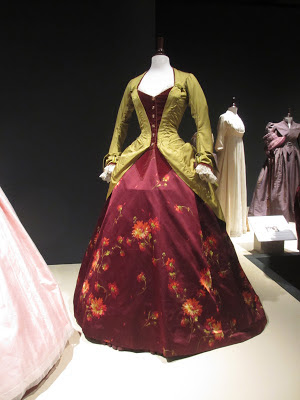 Of all the pretty dresses this one was my favorite.
It was worn by Minnie Driver in the 2004 film Phantom of the Opera
The colors were so unexpected, especially since I LOVE that weird acid green.
*note, my top matches the dress :) 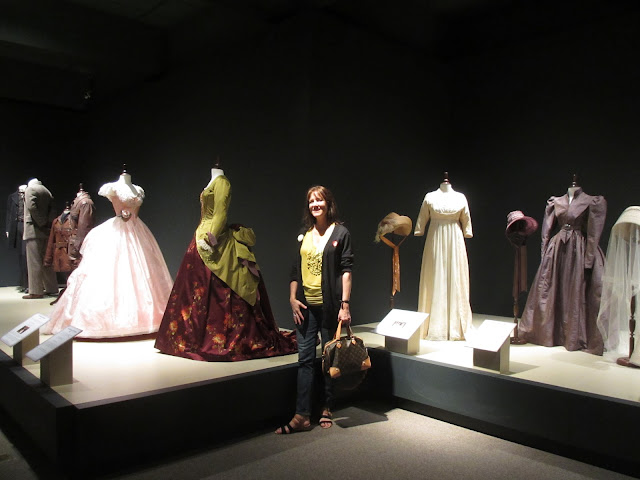 After viewing all these wonderful gowns I now have a long list of movies that I somehow missed and now very much want to see.
I'm sure it will be interesting to see the static costumes in action!
Posted by JD Nowland No comments: 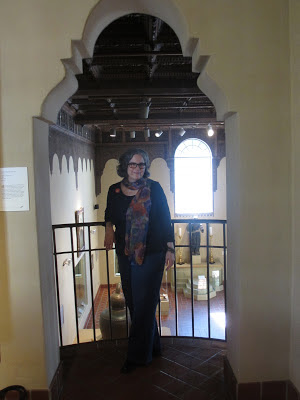 The Bowers Museum building is a gorgeous Spanish style structure that was built in 1931 on land already donated to the city of Santa Ana by a late 1800's developer named Charles Bowers. It was never used as a private residence but, opened it's doors as a museum in 1936. 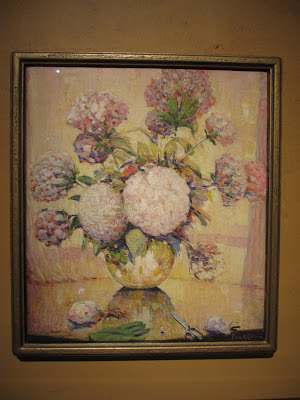 The permanent collection is full of beautiful artworks by mostly local artists who have donated works. My mother-inlaw tried to donate a family heirloom painting once but, was turned down :( 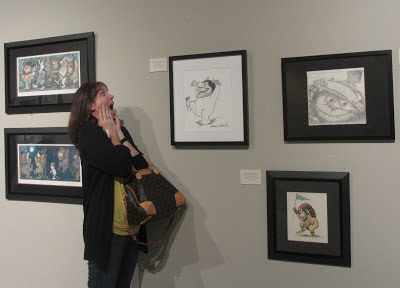 Besides the costume exhibit there is a FABULOUS exhibit of 50 drawings by Maurice Sendak celebrating 50 years of his work.
This exhibit will end April 28, 2013. 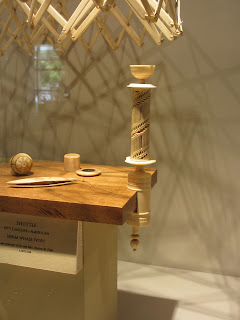 Also included in the price of admission is a scrimshaw exhibit of incredibly wonderful pieces carved by American whalers during the late 1800s. The items range from everyday pieces to decorative and the intricacy of the pieces is just amazing! The item pictured is a thread swift (?).
I love scrimshaw and I wonder if the old hippie in Jullian who makes scrimshaw ( Nov. 21, 2011 post titled Scrimshaw Encounter ) has been to this exhibit?
Exhibit will end July 7, 2013 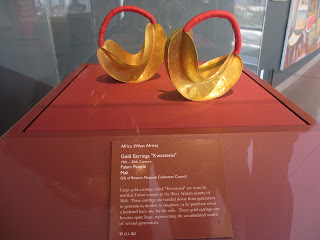 These fantastic huge golden objects are earrings (!) from Mali.
Apparently such earrings are passed from generation to generation and obviously represent wealth.
Talk about bling! 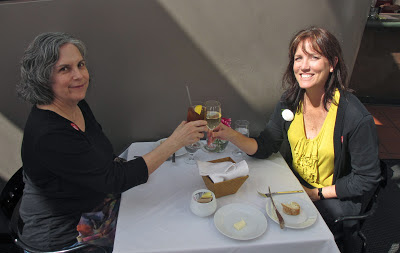 After a thoroughly enjoyable leisurely perusal of all things great and small at the Bowers Museum my good friend and I concluded our visit with a very delicious lunch at the museum restaurant.