THE FASHION WORLD OF...

I finally got a chance to visit the exhibit of the French designer Jean Paul Gaultier at the de Young Museum in San Francisco and it is terrific.
The eight rooms of the exhibit house 140 haute couture and pret-a-porter designs starting in the mid seventies and spanning thirty years.
Equally amazing to the garments are the 30 animated mannequins that talk, whistle, wink and sing.
This exhibit is memorable in so many ways...
and unfortunately it is leaving the de Young on August 19th. 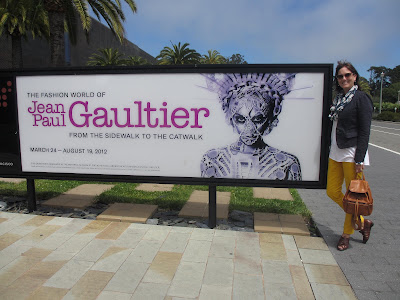 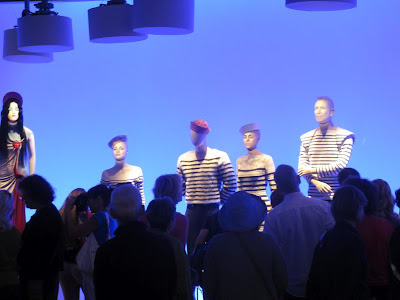 Upon entering the exhibit you immediately see the stripes and nautical looks that I always associate with Jean Paul Gaultier. But the following rooms contain so much wit, workmanship and innovation that it is indescribable.
The designer never had any formal training but, Pierre Cardin saw his talent and hired him as an assistant.Suffice to say the designer is incredibly versatile and his ideas and topics are diverse, amusing and amazing ( when you say things in threes you just sound smarter LOL ). 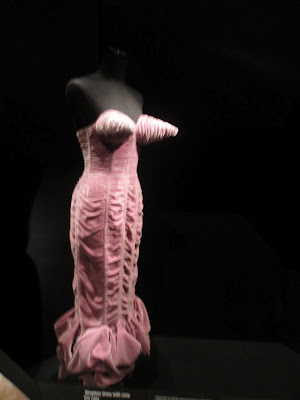 Of course the other classic Gaultier is the conical corset made famous by Madonna on her 1990 Blonde Ambition tour. Apparently this look was popular with both women AND men and one of Gaultier's earliest looks. The exhibit even has his childhood teddy bear that he affixed these conical shapes to it's little torso. 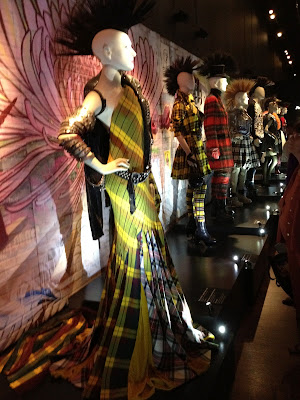 And he was mad for plaid and punks.
Posted by JD Nowland No comments:

DO NOT click on this video if you are going to see the show.
It is a very short clip of the amazing Jean Paul Gaultier talking mannequin.

These incredible hologram mannequins were sprinkled throughout the entire exhibit.
These are the future and I will not be surprised when department store mannequins start talking and telling customers to buy, buy, buy.
Posted by JD Nowland No comments:

There are eight rooms filled with different ideas and completely different types of garments. I took so many pictures I almost forgot to really look at the garments and appreciate the wonderful workmanship.
There were just too many looks to document so here is a smattering of the wildest outfits. 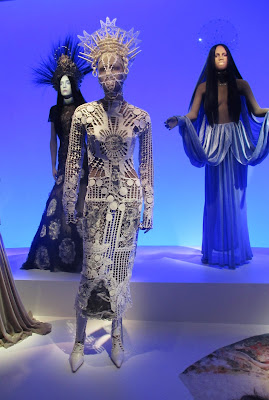 "Immaculate" gown from Virgins Collection, haute couture spring/summer 2007.
Worn by Kylie Minogue in " Like a Drug " video.
And yes, the eyes blinked and watched from under the mask. 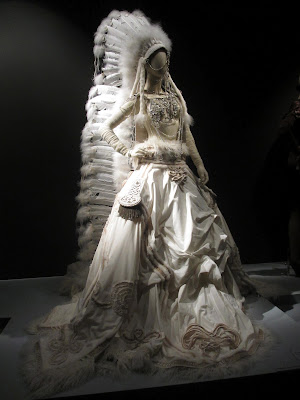 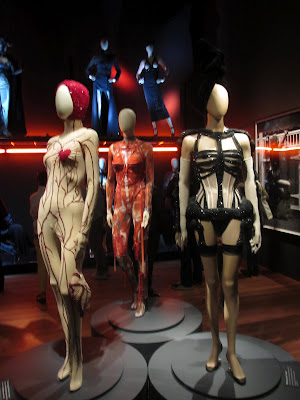 These body stockings with the skeletal, muscular and veins as the embellishment are fantastic.
The idea is fantastic and the execution of the idea is even more fantastic.
Morphing Collection haute couture fall/winter 2003-2004 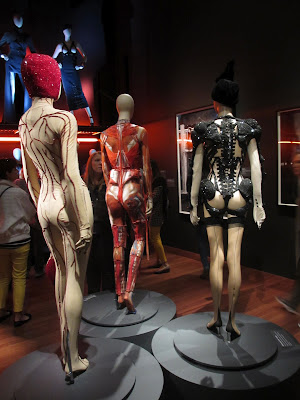 Not only were the ideas for the garments completely amazing but, also the materials used and manipulated to create the garments were equally awe inspiring. 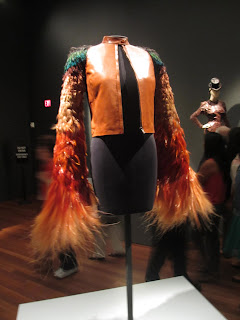 This leather and feather jacket is from Jean Paul Gaultier's 1998-99 collection. 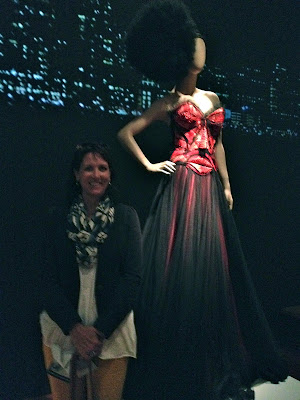 This is one of my favorites because I love faces and when you look closely the front of the corset is a total face! 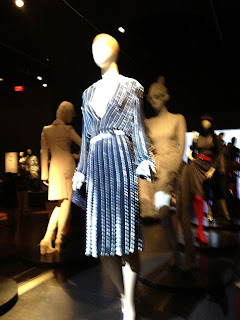 This is another favorite because it is so simple yet so effective. The stripes on this dress are created by sewing hundreds of buttons in vertical rows with smaller buttons at the top descending into larger buttons. Sequins would have been predictable. 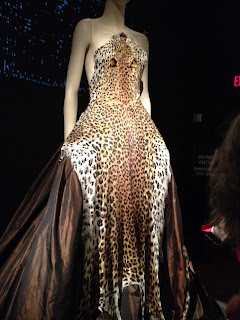 I honestly walked by this dress twice before my friend dragged me back and pointed out that the leopard skin was actually composed of zillions of tiny, tiny seed beads. And in the ear is a tiny beaded portrait of Gaultier. 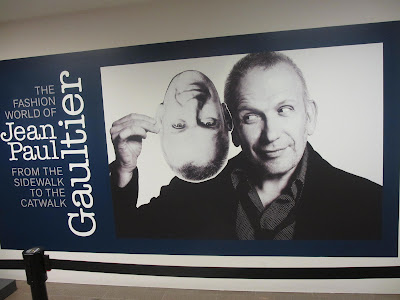 This exhibit is a wonderful glimpse into the imagination of a creative genius who does not take himself too seriously; although he has serious talent.