A Brooch with the Most 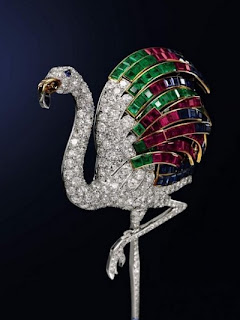 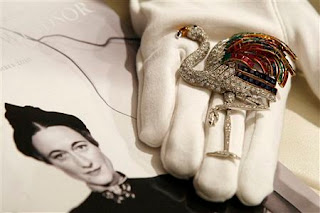 This flamingo is a 1940 Cartier brooch encrusted with diamonds, rubies, citrines, and sapphires. It was commissioned by the Duke of Windsor for the love of his life, Wallis Simpson. Their relationship was the scandal and love story of the last century. King Edward VIII surrendered the throne of England in 1936 to marry Wallis Simpson, a twice-married socialite from Pennsylvania.
This beautiful flamingo jewel encrusted brooch was first sold at auction in 1987, one year after Wallis Simpson's death. It was again sold at auction by Sotheby in November 2010.
No, I didn't buy it :( 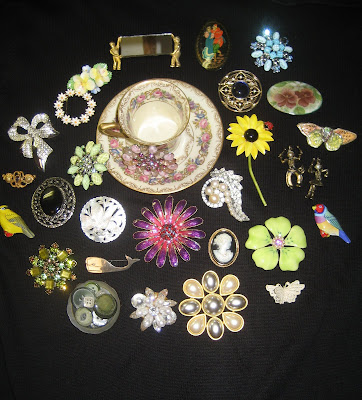 I have loved pins/brooches for decades ( the whale pin I wore in my second grade school portrait ).
Cartier jewel encrusted brooches are a little out of my price range but, I do truly love my eclectic, mostly vintage collection.
None of the pieces may have cost as much as a house, but to me they are priceless !
Posted by JD Nowland No comments: 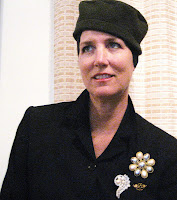 So here is a great idea I saw in W magazine... wear your brooches in a cluster. If one brooch makes a statement then three brooches make a shout!
And to complete the look be sure to wear a strange little organ grinder monkey hat with a cloth hairband over your ears. 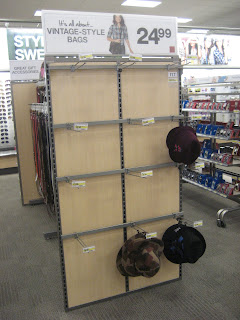 So once again a fashion launch for a guest designer at Target sold out before I ever even saw the products!

This time it was the hat launch by some New York millinery dude on Oct. 30. I went to a small Target on Nov. 1 and there was no sign of the launch so I asked a saleswoman working in accessories

" Where are the hats that were advertised in Vogue as being available Oct. 30? "

The saleslady looked at me like I was crazy and claimed to have no knowledge of any such hats. Puzzled, I looked around and saw no special hats.

The next day I stopped at a larger Target ( so it was just 3 days after the launch ) and this is what I found...

an almost empty display of the NY designer hats :(

It was the Missoni launch again-over before it started!

I wonder who is the next Target guest designer and will the product sell out before I can even admire their designs...
Posted by JD Nowland 1 comment: