I love to go yearly to the Fashion Institute of Design ( FIDM ) in Los Angeles, California to see their exhibit of Academy Award nominated costumes. I am not a fashion industry girl, I am a theater costume girl.
And this year for the first time I got to go to FIDM's Primetime Emmy Nominated Costume exhibit! 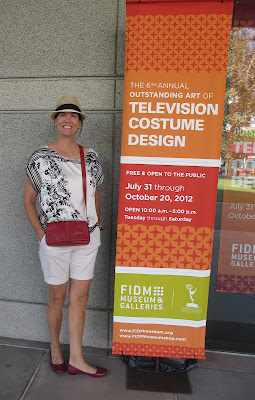 The exhibit has over 75 costumes from 16 shows that represent many different TV genres and time periods. Although this is the first year I heard about the exhibit it is actually the 6th year FIDM has showcased nominated costume designers and supervisors; and a few of the nominees are FIDM graduates! 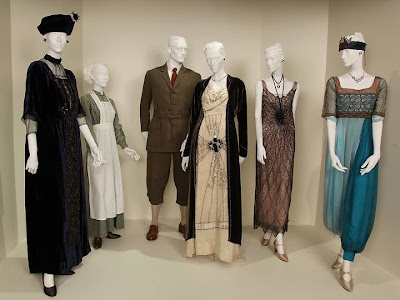 I admit I was most excited about seeing the Downtown Abbey show costumes. The show is on PBS and the costume designer is Susannah Buxton. She states her goal is to make sure the actors " don't look like they are in costume ". The details of the costumes on display are beautiful but, I wish there were more hats. 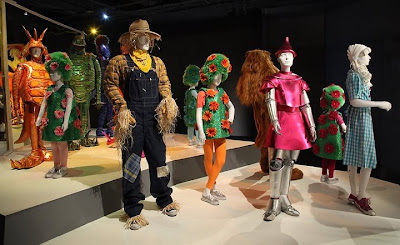 And I confess out of the 16 shows I had never seen almost half. However that did not diminish my enjoyment of the costumes. The kid show The Fresh Beat Band  on Nickelodeon had fantastic fantasy costumes and head pieces designed by Joyce Kim Lee. 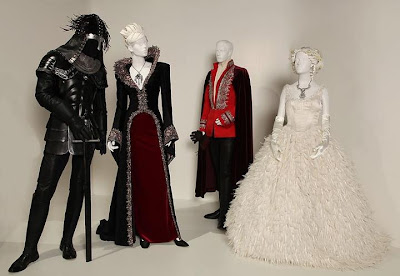 This costume collection from Once Upon a Time on ABC and designed by Eduardo Castro with his assistant Monique McRae is pretty impressive. The orange tutu outfit is also from this show. 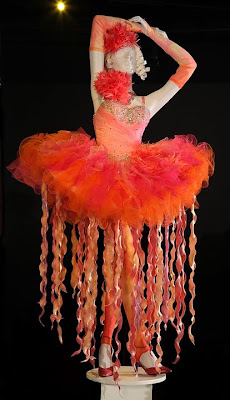 I downloaded these images from facebook ( hope that's legal ) but, there are lots more at

However, images do not do justice to all the amazing, inventive details of these costumes. Images also do not communicate the size of the actors ( Christina Ricci from Pan AM on ABC is tiny! ) and the wonderful textiles.
The costumes are on exhibit until October 20, 2012 and admission is free.
Posted by JD Nowland No comments:

Hats always capture my imagination and I truly try to wear hats as often as possible. And vintage hats are so wonderful because hats were worn daily, literally the crowning accessory to any outfit. 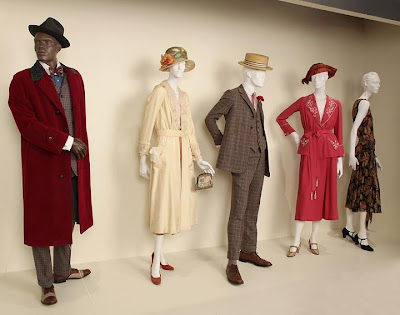 There were numerous hats included in the Emmy exhibit and especially memorable were the Boardwalk Empire hats. The show takes place during the 1920s which was a time of great hats. However imagine my surprise when a guard ( who was watching me suspiciously because I stood ogling a Boardwalk Empire hat for about 10 minutes ) informed me there was an entire separate exhibit of hats! 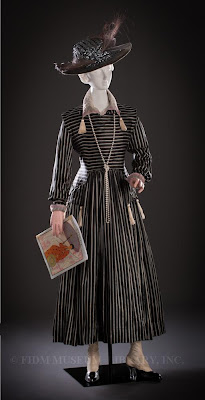 In a not very noticeable small room off the main exhibit there are 25 hats, bonnets, cloches, and toques spanning over 100 years from 1815 to 1930. The hats are a small part of the Helen Larsen Historic Fashion Collection which FIDM is working feverishly to acquire.
The exhibit is mainly hats, with some period photos, interesting hat accessories, and a few mannequins in outfits to complement the hat.
This hat is labeled J.W. Robinson Co. and is from Los Angeles, California dated 1917. The hat is made of metal sequins, silk velvet, and lacquered stripped ostrich feathers.
I also love the tassels on the collar points because currently I am quite mad for tassels. 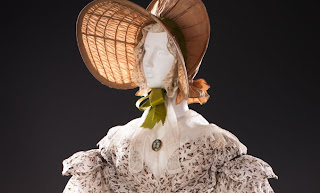 This bonnet is from Great Britain around 1830. Bonnets were so darn practical and it's a shame now only babies get to wear  serious bonnets. Although I guess sun hats evolved from bonnets.

Anyways, I obviously downloaded these images from the FIDM website because no photos were allowed :(  There are many more dynamic hats on display.

The exhibit is ' A Century of Millinery Style: Hats from the Helen Larsen Historic Fashion Collection 1820's-1920's ' showing until October 20, 2012. And admission is free!